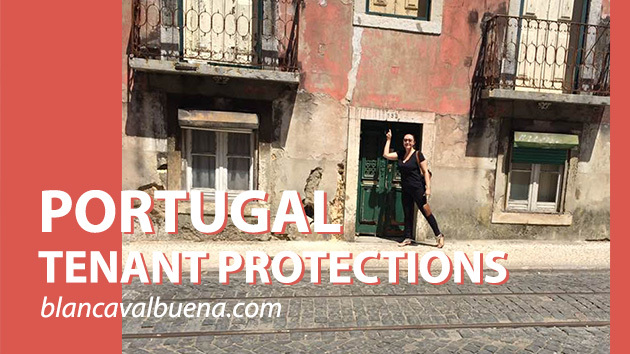 There were some interesting changes to rental and tenant laws in Portugal on February of 2020 that allow tenants more protections.

The law states that tenants will have legal tools available “designed to correct imbalance situations between tenants and landlords, to reinforce the security and stability of the urban lease. and to protect tenants in a situation of special fragility ”.

This amendment is called the “Cristas law”. Here are some of the things it includes, I will outline more at the end of the article.

Benefits for Owners/Landlords in Portugal

It’s not all just benefits for tenants. Landlords get some pretty sweet deals as well:

Rental contracts signed after February 13, guarantee an automatic renewal for 3 years if the duration is less than 3 years and there are no stipulations written into the lease. For example, if you sign a 2-year lease, it will be renewed for 3 years UNLESS the original lease has a clause about this.

We will go into this a bit deeper in the next section.

The Minimum Length of a Property Rental Contract is 1 Year

Leases have a minimum length of one year. If you were to sign a a lease for say 6 months, the lease is automatically renewed for 1 year.

Contracts Do Not Necessarily Need to Be in Writing

Crazy, right? While the law says that contracts must be executed in writing, a contract that is not written down may still be valid. For this to be the case, the tenant must prove that he/she was not responsible for the contract not being on paper. They must also prove that they used the property with the landlord’s agreement and that they paid rent for 6-months.

If a tenant is late, the fees to the landlord have gone down from 50% to 20% of the amount due. If the tenant continues to be late and there is a warrantor on the lease, the landlord must notify them before 90 days pass of the missing payments.

If a tenant is late with their rent for more than 8 days, more than 4 times within the year, the landlord may terminate the lease. In order to do this, the landlord must inform the tenant by registered mail and acknowledgement of receipt.

Landlord has to renew the first contract

If you are on your first contract, your landlord cannot object to the three year renewal unless he or she is planning to use the house for him or herself or for their kids.

If you get fired or end up being involuntarily employed, or you can’t work due to injury or if a joint tenant passes away, the tenant can terminate the contract without having to pay the future rents. This is brand new.

Renovations Must Be Justified

The landlord has a chance to terminate the contract if certain types of works need to be done on the property, or if (as mentioned above), he/she or his/her children plan to use the property. In case of renovations, they need to be justified. For example, they can’t terminate your lease to paint. This also goes into effect for limited-term contracts that were signed under the RAU

This limitation also covers limited-term contracts entered into under the Regime de Arrendamento Urbano (RAU). In this case, tenants who have lived in the property for more than 20 years when the law came into force (February 13), aged 65 or over cannot be removed.

Tenants have a right of first refusal after living in the property for 2 years (it was 3 years before) if the landlord decides to sell the property.

So this one is brand new…I’m shocked…you ready? Here we go:

Landlords are no longer allow to use pressure tactics to try to get you to move out. So, for example, they can’t remove your mailbox, or remove the handrails from staircases.

In cases where a tenant feels this is going on, the tenant must first tell the landlord (I would always recommend by certified mail) that those measures need to end and be rectified.

If the landlord does not comply, then the tenant can go to the government to request an inspection to verify the situation.

At this point, the government will intervene in the tenants favor.

When a property is advertised, the above cannot be mentioned as a restriction to getting the lease AND the landlords can’t specify preferences for certain kinds of renters.

Tenants may demand amounts that are not due to them

If an act of God happens in the property and the tenant is not responsible for it but pays for the repairs (example – something that comes up urgently), there is an IMA (injunção em matéria de arrendamento – lease order injunction) in place. So basically, the tenant can demand that the moneys be given back. I would suggest that you keep copys of any conversation with the landlord and the person that executes the work on the matter, and that you keep any and all receipts.

I hope this helped a bit to clarify the rights of tenants after the passing of the “lei Cristas”. If you have another question, leave it in the comments.

If you want to learn more, this is a good article (in Portuguese) outlining the law.