On the first leg of our trip, Antonio and I stayed steps away from Castelo Sao Jorge, perhaps the most famous site in Lisboa. It quickly became one of those landmarks that are so close I thought I’d never get to see it. I finally made it 2 months after arriving in Lisbon! If you go to Lisbon, don’t be an idiot and wait so long. Here’s a brief list of why you NEED to go check out Castelo de Sao Jorge:

6. An insane workout for your bum

7. A Ginjinha in chocolate cup break at the cafe

8. Did I mention the views?

9. Great place to escape the kids & in laws (more on this later)

A quick glimpse at the view from the Miradouro and a cat’s futile efforts to hunt a peacock. I think I messed up his mojo, but something tells me the peacock is someone you don’t want to mess with.

The Castelo de Sao Jorge is HUGE – GINORMOUS. You can see it from basically any corner of the city. As with most castles and churches, it has a pretty long history. It goes back to the 6th century and passed through the rule of the Romans, Visigoths, and Moors. The current structure was built by the Moors in the 11th Century and served as both a defensive building and royal residence. That changed in 1147 when Afonso Henriques captured the castle and became the first king of Portugal.

The castle was named after St. George (the patron saint of England – the one who slay the dragon). This was in part to celebrate the pact between England and Portugal. The castle then became the royal palace. Understand you are not going to a “castle”. Do not expect Versailles (I never did – anyone who knows a little about architecture can tell just by looking that this is a defensive building). It is so much freakin’ cooler than a stodgy old castle (No offense Versailles).  At this site, one can see history develop and truly understand the story of Lisbon and Portugal.

WHAT TO SEE AND DO AT CASTELO DE SAO JORGE

Castelo De Sao Jorge is magnificent and I am upset it took me so long to get there. You buy the tickets in a building outside the castle. Then you walk up to the gates, scan your ticket, and walk in. The first thing you will encounter is the miradouro. From here, you can basically see the entire city since it sits on the highest hill of Lisbon. There is also a kiosk here where you can pick up a quick snack. A statue of King Afonso Henriques (a copy of one made by António Soares dos Reis) stands in the center courtyard reminding those who visit that he was the one to take the castle from the Moors. There are cannons that call back to its military history.

From there, you can walk up to the romantic gardens. They are lovely and hold many surprises. From here, you can find the ruins of the former Royal Palace of the Alcáçova. The complex now holds the museum (tiny, but completely worth it). There you can see objects that were found on site, so you get a view into the lives of the people who inhabited the castle from the 7th C BC to the 18th C. There is a good amount of Islamic items as well.

You will want to walk the castle. This is not for the un-fit or elderly. Just being honest, if you are not in good health and a little athletic, I suggest you skip this. If you complain that your back hurts on a daily basis, don’t go. If you use a wheelchair – you’re gonna have a hard time. If your kid is still in a stroller – you may want to consider a different site (or get a sitter). If your kid likes to climb on things like a monkey and does not listen when you tell them to stop climbing (Catelyn Stark – I’m talking to you), you may want to leave them home. It’s an old building with irregular stairs and it requires lots of climbing. This was one of my favorite things to do at Castelo. There are no restrictions, no safety nets, so you can pretty much go anywhere you want. I walked all the way to the top and even touched the flag pole. I will admit, some of those stairs are scary (and they have NO RAILINGS). You fall, you’re gonna fall from a good height, and you’ll probably break something. I got a little vertigo from time to time – but this was wicked cool. If you make it all the way to the top, there is even a rookery. I had no idea, just saw a tower with a lock, and to my surprise there were owls, hawks and a kite. So freakin’ awesome.

There is also an architectural area where they are excavating. It is separated into three different eras: the first residential structures from the seventh century BC; the houses and streets of the mid-eleventh century, the Islamic period; and the vestiges of the last housing palate – the Palace of the Counts of Santiago – destroyed by the 1755 earthquake.

1. 7th-3rd Century BC: The first residential structures at the site.

2. 11th-12th Century: The Islamic period. You can see the remains of homes and streets.

3. 15th-18th Century: These are the ruins of the hall of Condes de Santiago palace which was destroyed by the 1755 earthquake. 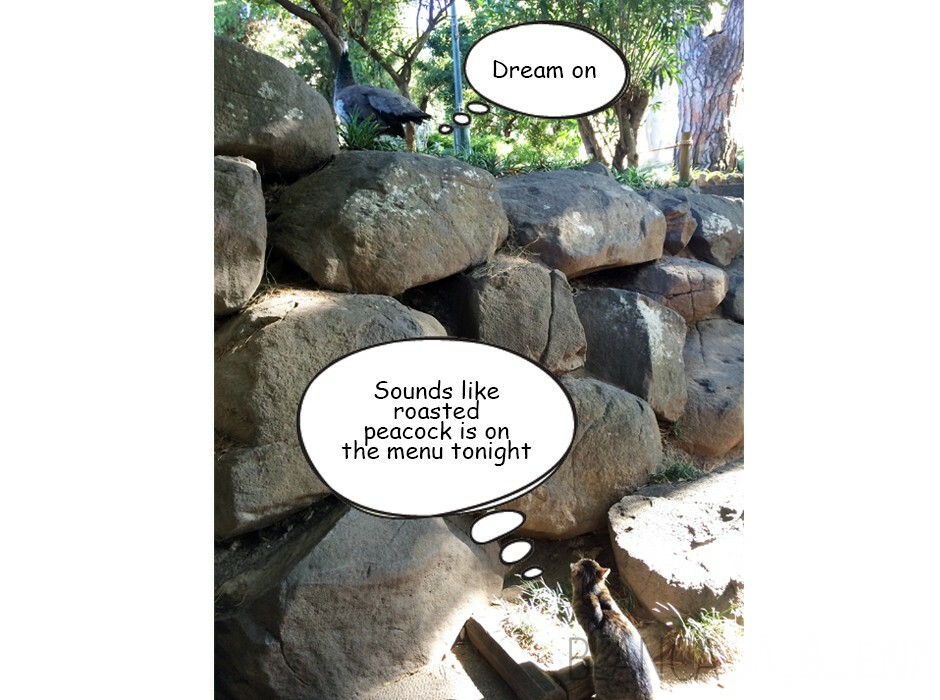 Sadly, I missed theTower of Ulysses and its famed Periscope. If you visit, let me know how it was. It’s a sort of camera obscura that allows you to view the city from inside the castle. I may have to go back before just for that.

My second favorite thing here was the peacocks. I had no idea that they roamed around freely at Castelo. It was my first time seeing one up close. I was genuinely sad that I sold my camera, cause this was one time I needed it.

WHERE TO EAT IN CASTELO SAO JORGE

The Castle Cafe: Located at the romantic gardens. This cafe  self service, you can grab a beer, ginja, and a quick snack like a sandwich or empada). It has indoor and outdoor seating. Sit outside and enjoy the castle, the peacocks, and people walking around the place.

Casa do Leão: Located at the romantic gardens.  To be frank, I did not eat there (I didn’t plan ahead, and €30 is just too expensive (at least in Portugal), but if that’s your sort of thing – I say go for it.

Bring your own: There are tons of places for you to sit, so go ahead and BYO lunch..

TIPS FOR YOUR TRIP TO CASTELO SAO JORGE

1. Comfortable Sports Shoes: Like I mentioned above. This castle is not for the faint of heart. It is physically demanding, has dangerous stairs with no railings, and since it is a defensive castle, in many spots there is no respite from the sun. Wear athletic shoes with good grip.

2. Sun Protection: I don’t want you to end up with skin cancer. Make sure to wear sunscreen (and bring more to reapply), and wear a hat.

3. Arrive Early: I am an early riser. I walked from my flat in Amoreiras to Castelo and made it there before 9. There was already a line. When I left a few hours later, the line was ridiculous. Do yourself a favor and get there early so you can enjoy the castle. This was nothing like the tourist-hell that is Versailles, but listen to me on this one.

4. Take Pictures Early: There will be less tourists.

5. Sticker Shock: This was the most expensive site I’ve visited in Lisboa. The ticket cost €8.50. Honestly, for me it was worth it. Or you could get smart and purchase the Lisboa card. With it, entry is free.

6. Leave the babies and the sick at home: This is not an easy site to traverse. I imagine that baby carriages and wheelchairs would be quite a task here. Not trying to discourage you, but the site is a bit on the more dangerous side once you go “into” the castelo (area past the moat). It’s a great learning opportunity for kids, but as I mentioned before, the site is risky. There are plenty of irregular stairs, rocks, and places where kids can get hurt. If your kids are not the kind that listen well, you may not want to bring them here.