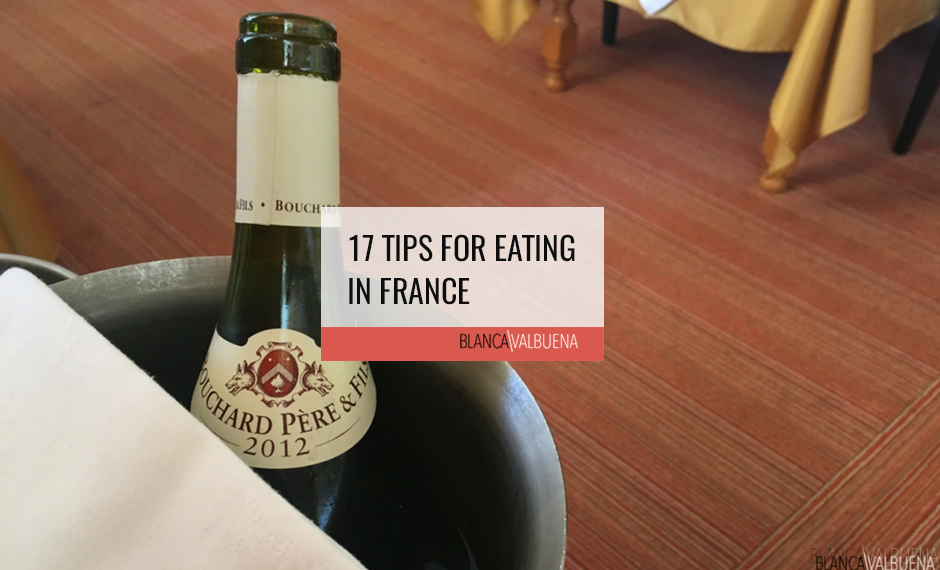 France is known for its culinary traditions. This can be somewhat intimidating for those traveling to France for the first time. I can’t tell you how many times I hear people ask me why I love France so much if the French are so rude. The French are not rude. There’s a big issue with us Americans which makes people in other countries react to us in different ways, so before I get to your 15 tips for eating in France, we need to discuss this. When you first visit France (and almost any other country in Europe), you will notice that most people speak not one, not two, but three languages. This is not the case in the US. My high school offered French, italien, and Spanish. Most of the people who took 4 years of one of those languages could barely get along in that language. There’s something in the American culture that keeps us from wanting to learn. Puis, most of us head to another country and either expect people there to either speak English, and when they don’t, we raise our voices hoping that people understand us better. This does not work and this is where tip number 1 comes in:

1. Learn Some of The Language (or cheat a bit):Or at least fake it. I would suggest that you learn some basics. If you can’t learn basics, there are some awesome apps that you can pop open right before you enter a restaurant to ask for a table to reference quick phrases. The thing is, in France, people appreciate it if you at least make the effort. Even if yourfrançais sounds ridiculous, it does not matter. People appreciate it that you try, and they take it as a sign that you have respect. So just try a little. The apps that I use are very cheap and will pay for themselves in seconds:

3. Timing: Service in France is slow; not a bad thing, just a cultural thing. People really love food and center their culture around it. Expect a regular lunch to last from an hour and a half to two hours. If you are in a rush gently let your server know by saying

4. Formules: These are like your prix fixe in the US.Funny enough, the term Prix Fixe is not typically used in France. Fondamentalement, for a set price you get a certain number of courses. par exemple, a restaurant may offer a starter, an entree and dessert as a “formule” for €19. The restaurants usually offer various choices for each course, so formules offer choice. Formules will vary by restaurant, but these are real deals. In the US a prix fixe would cost you about $25 - $35 and does not include tax. Some formules in France will even include a glass of vin de pays. Somehow it seems that the larger the quality, the lower the price. If you do not want to order from the “formule” ask if you can order “a la carte”.

5. Getting Someone’s Attention: Sûr, everyone knows waiters are known as garçon in French, but utilizing this word is considered ridiculously rude. Instead say “Pardon Madame” if your server is a woman or “Pardon Monsieur” when talking to a man, this is sure to get you quicker results.

6. Courses: Appetizers are “Entrees”, Main Course is “Plat Principal” these are followed either by dessert or fromage (cheese).

7. Types of Foods: You may have a friend with a shellfish allergy or maybe you have a vegetarian in the bunch. The following words could come in handy:

8. Sharing: Sharing is not caring in France. It is looked down upon. So when you order your formule, make sure that you order at least one other plate for your date. This way you can sneak in a bite or two without getting dirty looks.

9. Doggy Bags: Just was not done in France about 6 il y a des années. Luckily (at least in larger cities) this has changed. In some spots, when you ask for a doggy bag, the French WILL give you a dirty look and flat out tell you “No”. There is a misconception that portions are smaller in France and so that this is the reason. Not accurate. Portions in France are just as large as those in the US. If you must absolutely take your food with you, sneak in a tupperware and pack your food. You may still get some dirty looks, but in the long run, you paid for it. REMARQUE. Restaurants that offer “pour emprunter” or take are sometimes more kind towards doggy bags.

10. Dogs: France is super dog friendly. No need to leave your pooch at home. Dogs in France are incredibly well behaved (better than kids) and welcome at most outdoor seating areas. They seem to know to sit under the table and just relax, so may not need a doggy bag. A few restaurants and boulangeries have a no dog policy, but these are few. They will usually have a sign on their door.

11. Politeness: It will always help you to be nice. Everywhere you go in France, you will notice that people greet each other whether they know each other or not. When you walk into that restaurant, leave shyness behind and greet your server. The easiest greetings for you to learn are “bonjour” (good day) and “au revoir” (until we meet again). And almost everyone in Paris speaks English, but you shouldstill put in the effort. This is not the case when you head out to smaller villages, you’ll need a little French to get along there.

12. Beverages (wine and water): Most places will not automatically give you still water, you need to ask for it. Here are some simple beverage words to help you along:

Wine in France can be fairly inexpensive. Of course it can be really pricey as well. Most places will serve a decent table wine. Here’s the most basic wine ordering vocabulary for you: bouteille (bottle), verre (glass), white (blanc), rose (well…rose) and red (rouge). Put them together easily…e.g. “s’il vous plait, une bouteille de vin blanc”. And keep in mind that rose in France is not the sweet, cloying stuff that is drank throughout the US. Rose in France is mostly dry and delicious, so go ahead and give it a try.

13. Bread: Bread will not be the first thing served at your table. The bread will come with your meal. Usually it does not come with butter or olive oil. Keep in mind the French are master sauciers, so use the bread to eat the last of those amazing sauces.

14. Smoking: If you love outdoor seating, expect smoke to blow in your face. Anyone who knows me knows that I am not a fan of smokers (at all). In France you have no choice but to deal with it. Almost everyone in France smokes, but luckily many are moving over to vaping which is a bit less intrussive.

15. Asking for the Check: The French consider it rude to bring the check right away. For a French restaurant, bringing the check quickly is the equivalent of kicking you out, like being at a party and having your host flick the lights. When you are ready to go, say to your server “L’addition s’il vous plaît”. When they bring your check it will be on a plate. If you are paying with a credit card they will bring the credit card to you and swipe it in front of you. If you are paying in cash, put the cash on the plate and hand it to your server. Think of it as confirmation that you have paid.

16. Pourboire: Bet you’re asking yourself “do they tip in France?” There is no need to leave a tip in France. Your check will have 15% automatically added to the bill for your service. It is actually required by law to make sure that servers make a living wage. Your check will also include a VAT tax, so when you get your bill, that is all you have to pay. If you get extraordinary service, you can tack on a little extra, but it is not necessary.

17. Eating Like a Queen (or King):If you are smart, you will plan ahead and check out Michelin star restaurants. Most offer incredible deals for lunch on weekdays. It’s a great way to collect stars and eat the way you should.

A Few Extra Tips For Eating in France

These are a few etiquette tips so that you don’t get any nasty looks from the French as you delightfully bite into your food: