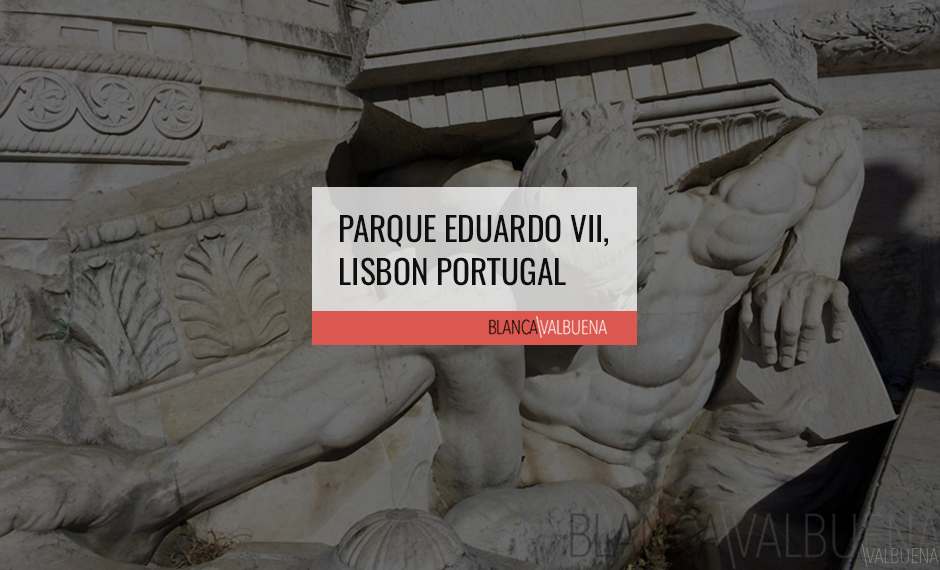 When we were staying at out 4th AirBnB in Lisboa discovery mode was near the Amoreiras shopping center, I knew the area was more on the business/residential side – which I was looking for after a 10-day stay in the very fun (but loud) Alfama neighborhood. As usual, I started researching for places to explore. Soy un ávido walker, so I was excited to be near (15 minutes by foot) to Parque Eduardo VII. My hopes were soon dashed as I read what a disappointing park it was on Tripadvisor.

Tengo algo que decirte, TripAdvisor was WRONG! Not just a little wrong – seriously wrong. This park is AWESOME! I could see this becoming my daily walking spot if I lived in Lisboa. Vamos a dividirla por eso me encantó el Parque Eduardo VII tanto.

This 118 ft monumento de altura se encuentra en medio de una plaza en la final de la Avenida Liberdade, and right before the start of the park. Es impresionante, to say the least. The first register of the sculpture is filled with turbulent, escenas tensas que representan el terremoto. A male nude figure struggles to hold up columns of a crumbling building. Un pulpo invade la tierra, ya que se toma allí por las aguas violentas. The next register shows scenes of order, growth, and commerce. A strong woman pulls along cattle as a man next to her carries the harvest. A man behind her plows the land, and a young man carries a cornucopia. A large figurehead in the front of the group holds the Portuguese shield. Above her, a female nude triumphantly draws the eye to the top of the monument, where a bronze sculpture of the Marques stands victorious with a lion. There is much more to the monument, so go and enjoy it, but make sure to bring sunscreen and a hat. There is no covering here. Also, be careful crossing the street to see it. Es una intersección muy importante y los coches tienden a ir rápido alrededor de la rotonda.

My favorite spot at the park is the Estufa Fria. It’s an eight-hectare greenhouse that was erected around 1930 by architect Raul Carapinha. It is so big that there are actually three greenhouses here. Antes de llegar allí, you will note a lake with tons of fowl. Follow this into the building with the unremarkable facade. This is the entrance and largest part of the greenhouse; la fria estufa. One can easily get lost here. It can also be a workout if you want it to be and if you want to get to the Estufa quente los cuales contiene plantas tropicales del efecto invernadero. También hay una estufa doce, which houses cacti and succulents.

Si estás loco como yo soy y llegar a la cima de la colina, you will reach a small esplanade with four large pillars and a fountain that commemorates the Revolution of 1974. This spot also has a gorgeous view of the Tagus river and the city. The fountain kinda looks like an ejaculating phallus…but maybe my mind is in the gutter today. You can judge for yourself. This is also where everyone goes to watch the fireworks on New Year’s Eve.

Hay un lindo y pequeño café aquí con una especie de lago lleno de peces. When I visited the Lisboetas brought their dogs here for a “swim”. I loved this! When the schools do their Praxes ceremonies (the equivalent of US college hazing…but not as serious (although the Portuguese think it is), this is where inductees are baptized. It’s just a cool place.

I could not help but think of the LGBT struggle while looking at this sculptural group. No estoy realmente seguro de si el artista quería decir para que esto suceda, but it did. He hecho un poco de lectura, and the sculptor was quoted as saying “It is not a piece made to order. Did it for me, was made to play a daze”. El secreto puede ser cualquier cosa, and I think it is up to the viewer to figure it out. Make sure to peek into these gorgeous ladies.

This is one of those places that used to break your heart, but was recently preserved and now looks gorgeous. It’s a sign of Portugal’s progress. This white and ochre building was erected for the 1923 Rio de Janeiro Expo and was brought back and rebuilt at the park in 1932 for the Portuguese Industrial Exhibition. It became a meeting place, concert, and a sports hall. It had fallen into disrepair. Outside of the building are some of the prettiest tile paintings in the city. The azulejo Los paneles fueron hechas por Jorge Colaco, and the sculptures by Raul Xavier. I am leaving the old picture up so that when you get to visit Parque Eduardo VII, you can see just how much work was done. The building is now used for conferences, fiestas, and pop-ups.

This piece broke my heart when I first saw it. I cannot understand why people decide to vandalize art. I understand the anger at the government, but I cannot understand why people feel the need to deface art. I wonder if this was disenfranchised youth or a stupid tourist. It is not ok to deface art. My hopes that people continue to visit Lisbon and spend more money there so that at some point, once the country bounces back financially, there would enough money to pay this young lady some well-deserved attention came true. She is now grafitti free and looks divine. She reminds me of early Etruscan sculptures and some of Picasso’s work from the early 1920’s. Me encanta que es corpulenta y grueso y hermoso Si estás en el parque, stop by, take some pics and give her some love so you can bring this lovely lady some more attention. She deserves it.

You can certainly picnic at the park, pero si usted no tiene ganas de cargar con su cesta de picnic en subida, there are plenty of options for you:

2. Food Trucks: At the top of the hill, right behind the 25th of April monument, by the amphitheater of Amalia Rodrigues, there are food trucks selling burgers, Japanese food, etc.. No hay cubierta aquí, so this is more your grab and go place.

3. Linha d’Agua: This is all the way at the top of the park at the Amalia Rodrigues garden. Tiene una buena carta de cócteles y vende aperitivos y pasteles. Great spot. This would be my pick.

6. El Corte Ingles: no es técnicamente in el parque, pero a una cuadra. The supermarket downstairs has tons of places to eat and the upstairs area now has a gourmet food court showcasing some of Portugal’s best chefs (who all happen to be male – but don’t get me started there).