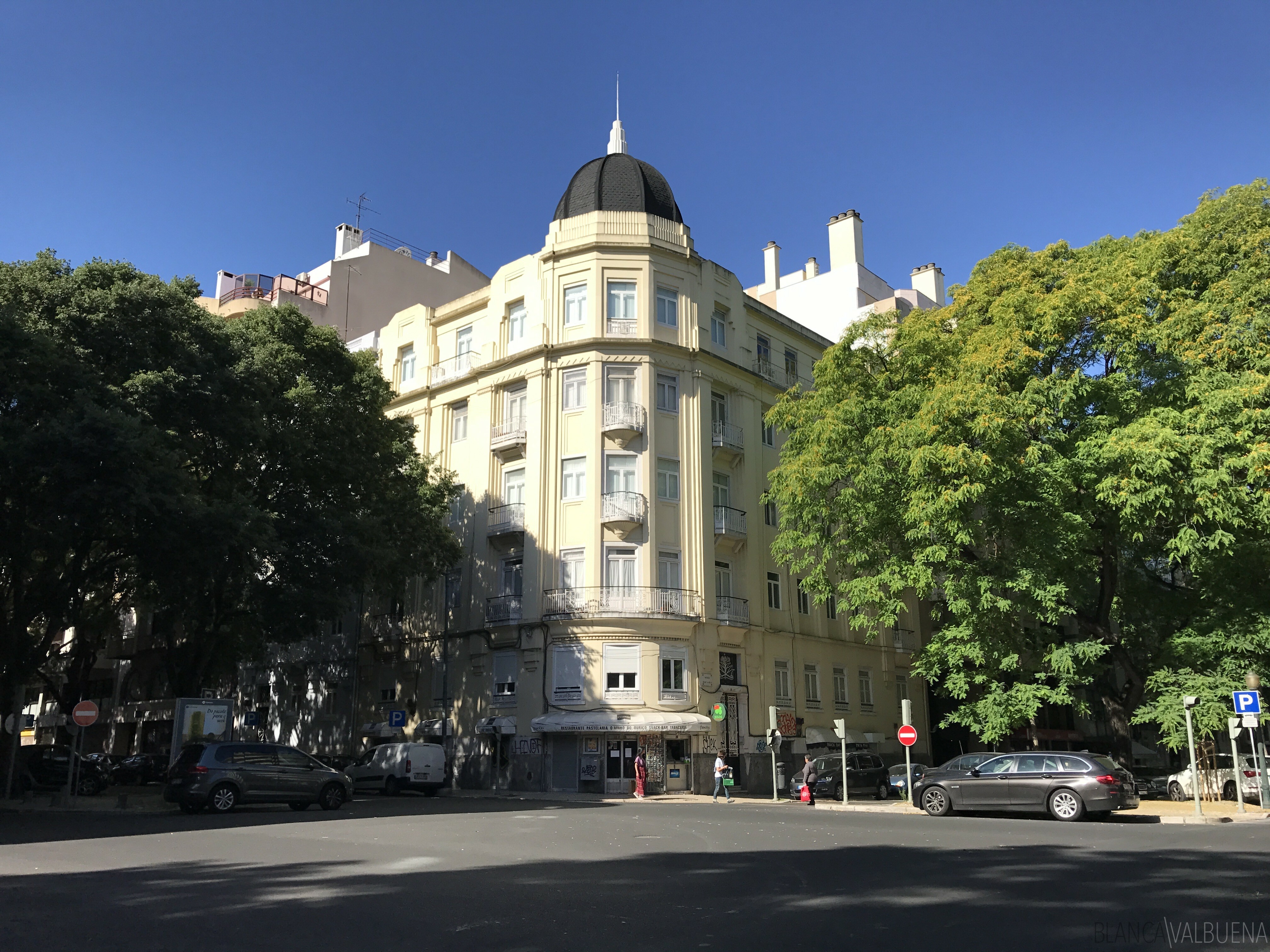 Many people ask us why we decided to make the Avenidas Novas neighborhood in Lisbon our home when we finally made our move to Portugal. After all, we had stayed at some of Lisbon’s best neighborhoods during our trips there: Principe Real, the Alfama, Estrela, Santos, The Mouraria, and Amoreiras. It took a lot of thought, but the Avenidas Novas neighborhood won us over for many reasons, its parks, museums, shopping, restaurants, and its lack of hills.

The Avenidas Novas Neighborhood in Lisbon

Avenidas Novas is quite large. Its starting point is at the end of Avenida da Liberdade at the spot where Marques de Pombal Square meets Parque Eduardo VII, spans all the way to the Campo Pequeno bullring, goes past the Entrecampos train station. It’s one of Lisbon’s “newest” neighborhoods and is a sign of its expansion northwards.

The neighborhood has a great mix of architectural styles. There remain stunning art nouveau mansions such as that which houses the Dr. Anastacio Goncalves Museum, and there are plenty of Estado Novo building and monuments like the laurel crowned columns at Parque Eduardo VII, and even neo-Mudéjar touches like the bullring.

Avenidas Novas has a vibrant community as well. There are older residents who have lived there their whole life. There are business people who swarm the areas by Lisbon’s Financial Center, Picoas Center and Saldanha. There are students from the Universidade Nova de Lisboa, and there is a small, but growing group of expats from all over the world.

The Micro Neighborhoods of Avenidas Novas

Avenidas Novas bustles during the day from pedestrian and car traffic as businesses do a brisk trade or people take advantage of its several cultural and recreation sites. Access is easy via several major roadways and public transportation. Many restaurants are found here as are cozy cafes, including the recently added Choupana Caffe.

Things to do in Avenidas Novas

Estufa Fria & Estufa Quente: There are over 300 species of plants at Lisbon’s greenhouse. The spot is simply gorgeous and is great if you want to learn more about nature, or if you just want to get a little peace. (Blue or red line to Sao Sebastiao). Parque Eduardo VII

Parque Eduardo VII: One of Lisbon’s largest parks and one of my favorites. It’s made up of 26 hectares holds both greenhouses and has some fantastic restaurants. It is a must see in Lisbon.

Gulbenkian Garden: The Gulbenkian Foundation is simply outstanding. It comprises a gorgeous park, an amphitheater that often holds free concerts, and two museums.  It gets pretty busy on weekends, so if you are going to visit, check it out on a weekday. (Blue or red line to Sao Sebastiao). R. Dr. Nicolau Bettencourt

Casa-Museu Dr. Anastacio Goncalves: The house for this museum was the home of José Malhoa. The home was purchased by Dr. Anastácio Gonçalves who amassed an incredible art collection some of which is housed here. If you are a fan of Chinese and Portuguese art, this is a must. (Red or Yellow line to Saldanha). Avenida 5 de Outubro 6

Artur Prat House: Also known as the Building of the Order of Engineers, this building is a gorgeous combination of old and new. The original structure from 1812 has French architectural elements (like its Mansard roof), classical elements (like its pediment and columns), and a dash of Art Nouveau to make it even more interesting…and when you go to the back of the building, it is completely modern. Avenida António Augusto de Aguiar, 3D

Palacio José Maria Marques: This one is officially in Arroios, but it’s so close to Avenidas Novas that I had to include it. This palacete is one of the few Golden Age homes that survives in Avenidas Novas. It has touches of Baroque, neo-Romanesque, neo-Arabic and Arte Nova. Avenida Fontes Pereira de Melo, 28-28A

Casa dos Viscondes de Valmor: Probably one of the prettiest homes in Lisbon, this home from the early 1900’s is composed of Neo Classical and Neo Romanesque touches. (Red or Yellow line to Saldanha or to Campo Pequeno) Avenida da República, 38-38A

Casa Da Moeda: This building is another that was touched by the Estado Novo regime, it exudes modernism and order. The casa da moeda or house of coin is Lisbon’s mint. In this factory, machines pushed out Portuguese currency. If you are into typography, architecture and sculpture…this is a must see. Avenida Antonio Jose de Almeida, 42.

Palacio Pinmenta: Not officially in Avenidas Novas, but since it is not so far I figured it was worth including. The palace is home to the Lisbon City Museum and holds the records of the city’s history. This is the place to go if you want to learn about Lisbon from prehistoric times until today. Don’t forget to walk the courtyard, it offers some nice surprises. (Yellow line to Campo Grande). Campo Grande

Campo Pequeno: Lisbon’s bullring unfortunately still practices animal torture. However, the building is spectacular, there is a shopping center below, lots of restaurants and plenty of spots to enjoy the sunshine. (Yellow Line). At Campo Pequeno

Campo Grande: Not officially part of Avenidas Novas (it belongs to Alvalade), but it is so close I had to include it. Campo Grande is a gorgeous park and a perfect place to spend a lazy Sunday. (Yellow line to Campo Grande). At Campo Grande

Mercado 31 de Janeiro: This is a fantastic farmer’s market. The fish is incredibly fresh and they have a fantastic little restaurant inside as well as a sushi shop. R. Eng. Vieira da Silva

Where to Shop in Campo Pequeno

El Corte Inglés: This is as close as you will get to a Macy’s or Nordstrom in Portugal. It’s a huge store with a supermarket, hardware store, home goods, and – of course – clothing and shoes. If you need it, you can find it here. (Blue or red line to Sao Sebastiao). Av. António Augusto de Aguiar 31

Avenidas Novas is a Great Location

There are four major subway stops in the Avenidas Novas neighborhood. This makes it a great location if you want to travel to all the other neighborhoods in Lisbon.

The 727 to Belém also runs through Avenidas Novas.